We believe that 1v1 situations are at the core of youth player development, but it is vital that players are also able to recognize space, teammates, and opposition around them, thus the importance of the games-based approach in the Academy Program.

Research into coaching practice within soccer commonly reports that coaches employ a “traditional” approach to skill acquisition. Traditional coaching approaches assume that technique needs to be mastered prior to game play, but these approaches focus on the practice of technical skills often in overly simplistic and unpressurized situations that do not mimic the demands of real game play. This direct approach can create a separation between technique and tactical knowledge, leading to a disconnect between practice and game play where players are not able to respond to game situations.

North Calgary FC believes that the game-based approach is the most effective way to improve decision-making, skill execution, and physical fitness in youth soccer. 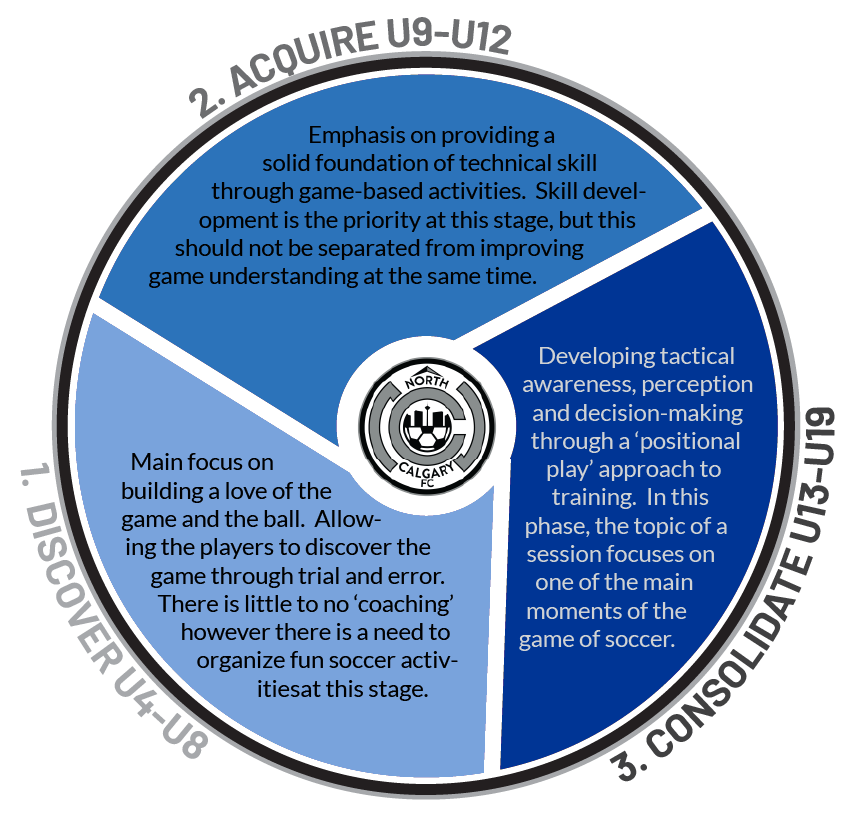 PLAYER DEVELOPMENT PHASES
The PDP provide players with age-specific training, preparing them to be successful in realistic game situations. This lays the foundation for them to progress in their journey towards maximizing their potential as soccer players. Each developmental phase has a set of criteria that our coaches will follow in order to allow players to make appropriate progress while transitioning from one phase to another.

To support our player’s development, the Academy Team has developed a phase-specific curriculum aimed to:

All Academy training sessions will reflect and reinforce the club PDP. Whether the training sessions are delivered by our volunteer coaches when working with their teams, or by our Coaching Team as part of the Academy Program, clear and recognizable learning objectives will be established prior to the sessions in order to offer players the best chance to develop.
DISCOVER PHASE 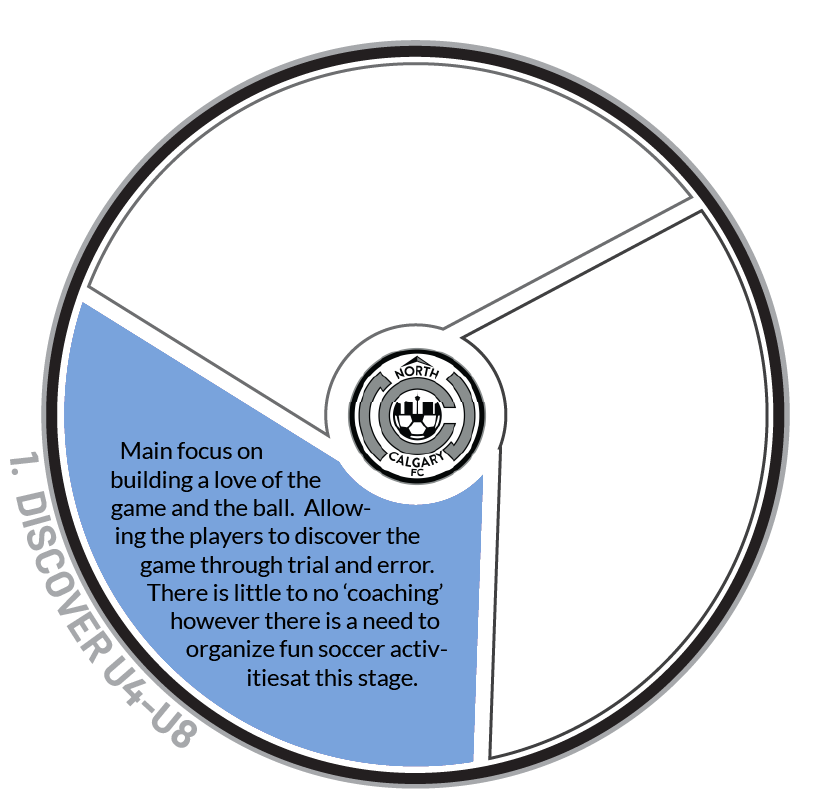 The emphasis will be on exposing our youngest players to a high number of game realistic scenarios, mainly 1v1 situations. Within those 1v1 situations, the focus will be on developing dribbling and scoring (shooting) skills. This fits with the psychological and mental capability profile of these young children, who let’s face it, are rather egocentric. They aren’t able to deal with complex decision making required to know when to dribble, and when and whom to pass. The point is, before we start developing the notion of soccer as a passing game, we must focus on the development of skills that suit where they are mentally and cognitively, like keeping the ball, running with the ball and scoring.
"My first question is always: Can this player dribble? I only want players who have that skill so that’s always what I look at. I want full backs and central defenders and midfielders and inside forwards and winger who can dribble. Because you can learn control and good passing…So, yeah, dribbling, that’s the key."
-Pep Guardiola - one of the most successful soccer coaches of all times
ACQUIRE PHASE 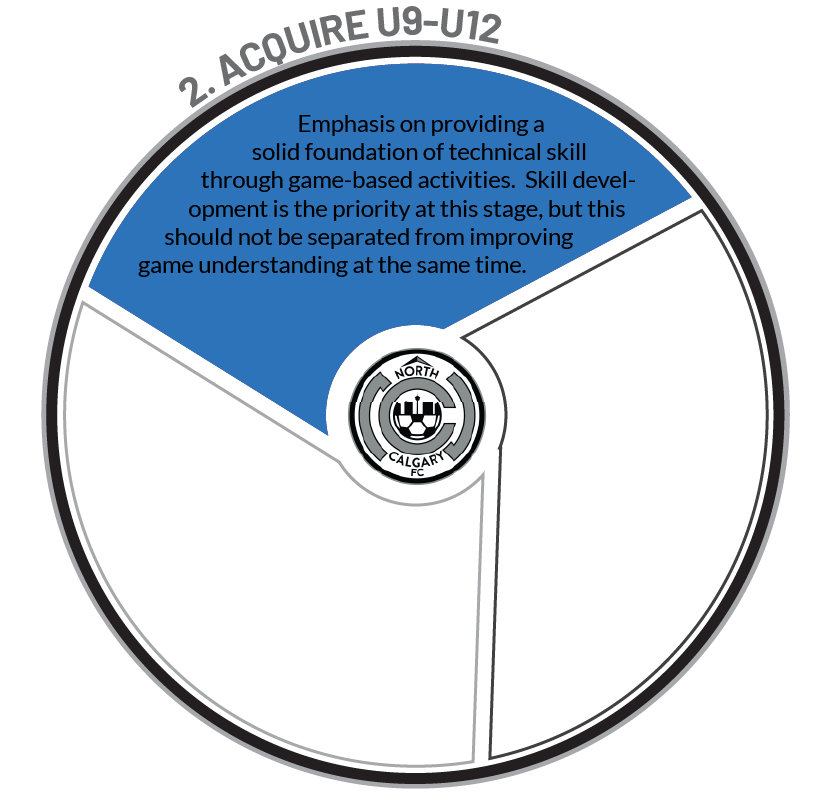 During the Acquire phase of development, players will be encouraged to practice their technical skills, especially the ability to master the ball with and without pressure (1 vs 1 situations). Players will also be encouraged to express themselves in both training and games, with little emphasis placed on the outcome (result) of the games. This learning environment will hopefully lay the foundation for players who are confident, technically strong and self-motivated to succeed.

Our Academy team will design sessions based on the main moments of the game (attacking, defending & transitions), mainly emphasizing the following four core skills:

These four core skills make up 95% of the actions of any outfield player during a game of soccer which is why it is critical to train these actions repeatedly so that the players have the opportunity to develop their ability to perform them more effectively during a game.
All players in the Acquire Phase will take part in our Academy Program. In addition, volunteer head coaches will deliver an extra team practice on a weekly-basis for the duration of the season. Our Academy team will work closely with our volunteer coaches to ensure they receive all the support in terms of session plans and areas to focus on in order to maximize player learning.
CONSOLIDATE PHASE 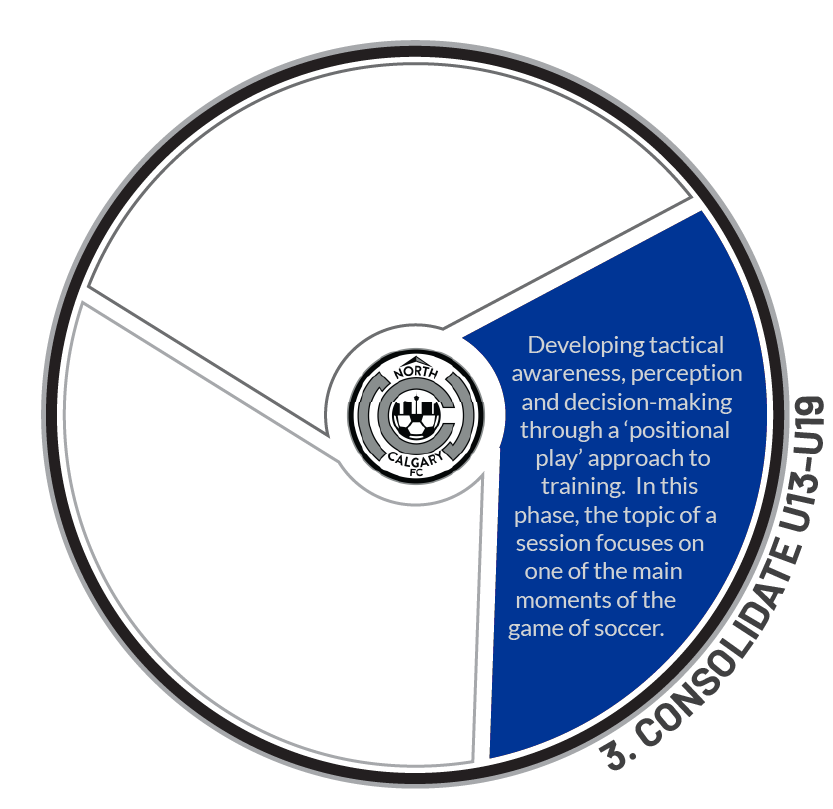 Whereas the purpose of the Acquire Phase (U9-U12) is to develop the core skills, the Consolidate Phase is about learning how to apply them in a functional way. In the Consolidate Phase the focus shifts towards learning to play as a team and developing an understanding of the team tasks during the main moments (attacking; defending; transitioning), as well as the specific tasks that go with the individual team positions.

Consolidate Phase sessions consist of 4 components:
All players in the Consolidate Phase will take part in the Academy Program. In addition, volunteer head coaches will deliver an extra team practice on a weekly-basis for the entire duration of the season. Our Academy team will work closely with our volunteer coaches to ensure they receive all the support in terms of session plans and areas to focus on in order to maximize player learning.
GAME MODEL
The Game Model is a set of principles that guide the behaviour of our players and teams.

Our approach is to be proactive in all moments of the game. We compete each week with the goal of being successful by playing positive soccer.

We encourage our players to be brave and creative while performing soccer specific actions (passing, dribbling, creating space, etc.) on/off the ball during the attacking phase. Starting from the back, through the midfield, and in front of the opposition goal. Even the youngest teams in the Acquire Phase (U9-U12) will be encouraged to exploit space and receive the ball in areas of the field that are traditionally considered ‘dangerous’ by many coaches, parents and even team mates. Why? Because players learn by doing and only by allowing them to solve high pressure situations they will become more confident.

When we lose the ball, we ask our players to apply immediate pressure to win it back. We aim to press high in the opponents half to force a mistake to regain the ball. When we win the ball back our first objective is to attempt to play the ball forward to counter attack with numbers to create chances and score goals.